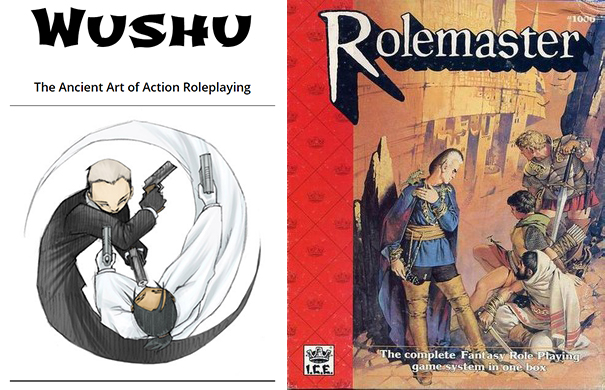 I’ve been gaming a long time (more than three decades), and in that time I’ve played a great number of different games and all kinds of genres.

I’ve played some very cruchy (i.e. rules-heavy) games, like Rolemaster and Champions. I’ve played some games with little or (almost) no crunch, such as Wushu or HeroQuest. And I’ve played games that fall along the spectrum between heavy and light.

And what I’ve discovered over the years is that my preferences for rules runs the gamut from light to heavy. And it depends on a number of factors.

The setting in which the game takes place makes a huge difference in how crunchy I want the rules to be. Highly detailed settings with many moving parts lead me to prefer a crunchier set of rules. I expect the rules to model the setting appropriately, and there are some settings in which the rules need to have more heft to them in order to accurately represent how things are supposed to work within that world.

As an example, I feel that Star Wars is a setting that can be represented with fairly light rules. As a setting that is the basis for a great deal of high adventure and where the protagonists constantly take huge risks, and where the details of how the technology—or Force powers—work are still fairly nebulous (at least in the primary source material such as the movies and TV shows), there isn’t the need for a set of rules that rigidly defines such things.

How easy is it to shoot someone with a blaster? That depends on how important you are. How much damage does a blaster do, or a lightsaber? As much as it needs to do. In The Empire Strikes Back, Luke hits Vader in the upper arm with his lightsaber and it apparently hurts, but not much more. Seconds later, Vader takes Luke’s hand off at the wrist with a single swipe. Did Vader’s armor block Luke’s lightsaber? If so, why was it so easy for Luke to cut off Vader’s hand in Return of the Jedi?

More important, though, is the question: does it actually matter? Calculating exactly how long a hyperspace jump takes, or how much fuel it uses, or how many shots are in a blaster pistol is not what Star Wars has ever been about. So I don’t need a comprehensive set of rules to define everything in detail.

Conversely, if I am using a hard SF setting, like a realistic colonization of Mars 50 years in the future, for example, then I want rules that will model that experience. Character skill matters, and how technology works matters, and those things shouldn’t be glossed over because the experience will be less satisfying for me and the people with whom I game.

I have found that, if I’m planning to run a one-shot, I have no interest in grabbing a rules-heavy game. In those cases, I tend to look for speed of play to ensure that I can fit in everything that’s necessary for a satisfying play experience in the time allotted. In a longer, ongoing campaign, I can delve into those elements of a game that take more time. For example, if I’m running an entire campaign of Ars Magica, then the laboratory rules don’t get in the way because we can dedicate the time to explore how the player character mages spend their time researching new spells or developing their magical skills.

This is related to setting, but is a slightly different element, more based on genre. Are the player characters expected to proceed through the zero-to-hero steps? If so, then I will tend to prefer a game with at some player-facing crunch, so that they feel the mechanical difference as they advance. On the other hand, in a game where the players characters are already competent and won’t really change much during the game/campaign, I feel less of a need to have the crunch. Superhero games are a good example of this, as most superhero comics do not show an advancement in skills as the stories go on. So I tend to lean toward lighter rules for this type of game.

Obviously, when I’m running a game, the preferences of my players are important to me. Different people have different approaches to gaming. For example, I know one player who feels that crunch-light games take him out the immersive experience. And I know another gamer that feels that crunchy games completely get in the way of an immersive experience. So when I choosing a game, the players I will have matter to the choice of systems I present to them.

I tend to run games far more often than playing. In fact, easily 95% or more of my playing time is spent as the DM or GM (or whatever it is called in any particular game). And I only have so much time prepare for a game, as I have a career, a family, other hobbies, and other responsibilities. Now, the amount of rules in a game doesn’t always reflect how much work it is to run. For example, some fairly crunchy games have a ton of GM resources like NPC stats, or published campaigns, or other elements that can reduce the time needed to prepare. For example, I find Pathfinder to be a fairly crunch-heavy system. But if one is running an Adventure Path, then a great deal of prep work is already done.

Conversely, I find rules-light games often leave a certain amount of work to the GM, especially if it is a generic/universal system and so doesn’t have a fully-fleshed out “genre pack” ready to use. As I’ve written previously, this is the biggest issue with the HeroQuest RPG.

As a player, rare though that is, I find that I tend to prefer a bit more crunch. With only a single character to manage, I like to have a few more widgets to play with, and I can focus on the rules that really pertain to me to a greater degree.

But having said all that, I often tend to fall pretty much right in the middle when it comes to the level of crunch. I certainly love games like HeroQuest, and Wushu, and Swashbucklers of the Seven Skies, but I tend to lean toward slightly crunchier games like AD&D (or D&D 5E), The One Ring, the D6 system as seen in the original Star Wars rpg and others, and similar games.

These factors all matter to me, and all influence how I choose the system I want to use for a particular game. I admit that I often use the system that comes with a particular setting if I really like the setting the system is “good enough” for my purposes. As I said, I only have so much time to dedicate to prep, and a complete game is a major help.

No one system is right for everyone—and often, no one system can satisfy all of an individual’s personal preferences—so people will fall on points all along the crunchy/light spectrum. And this is good, because there are lots of games out there, and most likely people will find the games that do what they want for them.

As long as people are playing and having fun, then everything is doing it correctly.

What about you? Where do you land on the spectrum? What are the factors that contribute to your preferences and/or choices? What games do you play that fit your preferences so well that you feel they were written just for you? Tell us about it in the comments.