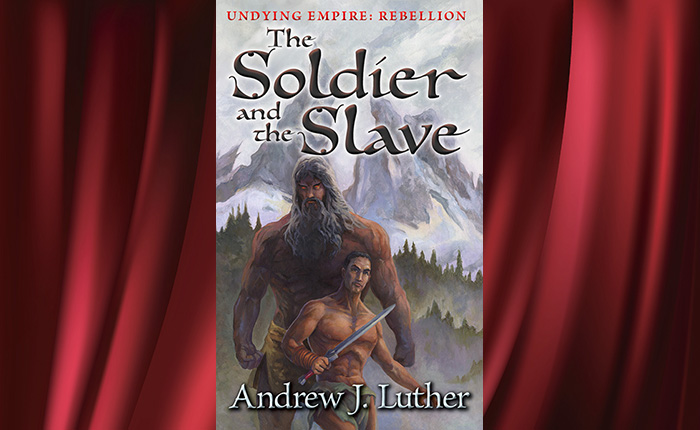 The Soldier and the Slave

This is the last week to enter the Goodreads Giveaway, as it ends next Sunday, September 25, 2016. I’ve got five copies of The Soldier and the Slave that I’ll autograph and send out to five lucky winners.

The Soldier and the Slave

See the giveaway details
at Goodreads.

Pre-orders for the ebook of The Soldier and the Slave are live on Amazon. The pre-order price includes a 25% discount off the regular price. So if you enter the Goodreads Giveaway but don’t win, you can still pre-order the book at a great discount.

The Soldier and the Slave will be released on October 9, both in print and on Amazon. On the release date, the price for the ebook will go back to normal. So make sure you pre-order before October 9th to get the discount!

The sale for the print version of The Soldier and the Slave will run from October 9 through October 23, 2016.

The Traitor and the Thief

I’m working hard on The Traitor and the Thief every moment I can get. Things are going great with this book—it’s flowing very smoothly and I’m very happy with the results so far.

The Traitor and the Thief continues the story begun in The Soldier and the Slave, and also brings back a character familiar to those who read The Witch’s Path. Yes, Phana will play a big role in the second novel of the Undying Empire: Rebellion trilogy. Many people have been asking me about her, wanting to know more about her past and her “abilities” that she used in The Witch’s Path. Her story in The Traitor and the Thief will not disappoint on that score.

The Revenant and the Reaper

Not much to report here. I do know how the entire trilogy is going to play out, of course, so I’ll be able to jump right into this novel as soon as the manuscript for The Traitor and the Thief is complete and goes into editing.

I decided to go with a bit more action in this month’s story, called Exigent. I’m having a lot of fun doing these short stories, which allow me to play with various genres other than sword & sorcery. Exigent could be called a combination of sci-fi and alternate history. Look for it next Sunday.

Tales of the Undying Empire

For those who haven’t yet jumped into the standalone novels in the Tales of the Undying Empire series, I’ve got exciting news. I’m putting together an omnibus edition of all three books, which will be available as both an ebook and a print book.

The print book will be a 6” x 9” trade paperback size and will contain the first three novels in the series, The Tower of Dust, The Severed Oath, and The Witch’s Path.

The omnibus will be called Tales of the Undying Empire, Volume 1. I’m working toward a release date of November 1st, so it’ll be a great Christmas gift for the sword & sorcery fan in your life.

Note that I’m referring to this omnibus as Volume 1, as I fully intend for there to be a second volume. As mentioned in last month’s update, I will be jumping into a new novel in the Tales of the Undying Empire series immediately after I complete The Revenant and the Reaper.