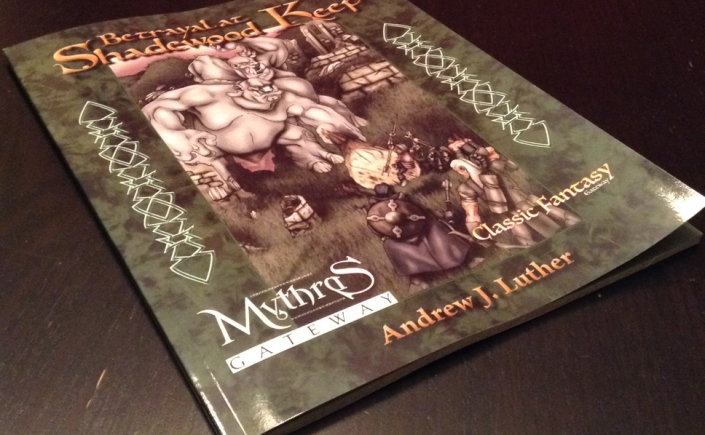 I’m happy to announce that Betrayal at Shadewood Keep, the licensed adventure for the Mythras roleplaying game with the Classic Fantasy supplement, is now available in print!

This 68-page adventure is a perfect-bound, full-colour book with a beautiful glossy cover. And it is now available from Amazon. 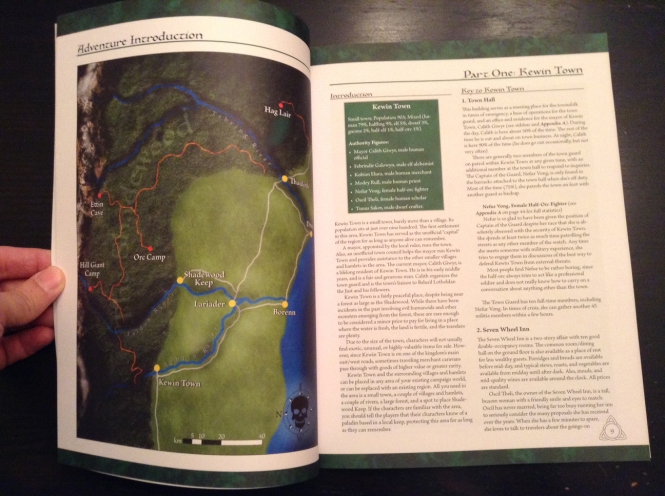 Remember, buying the POD book entitles you to a free copy of the PDF. Simply send us an email, attach your Amazon receipt and quote “Betrayal at Shadewood Keep Free PDF” in the subject line.

And if digital files are your thing, Betrayal at Shadewood Keep is also still available in PDF from DriveThruRPG and RPGNow.

I’m happy to announce that Betrayal at Shadewood Keep, a licensed adventure for the Mythras roleplaying game using the Classic Fantasy supplement, is now available for sale on DriveThruRPG and RPGNow. 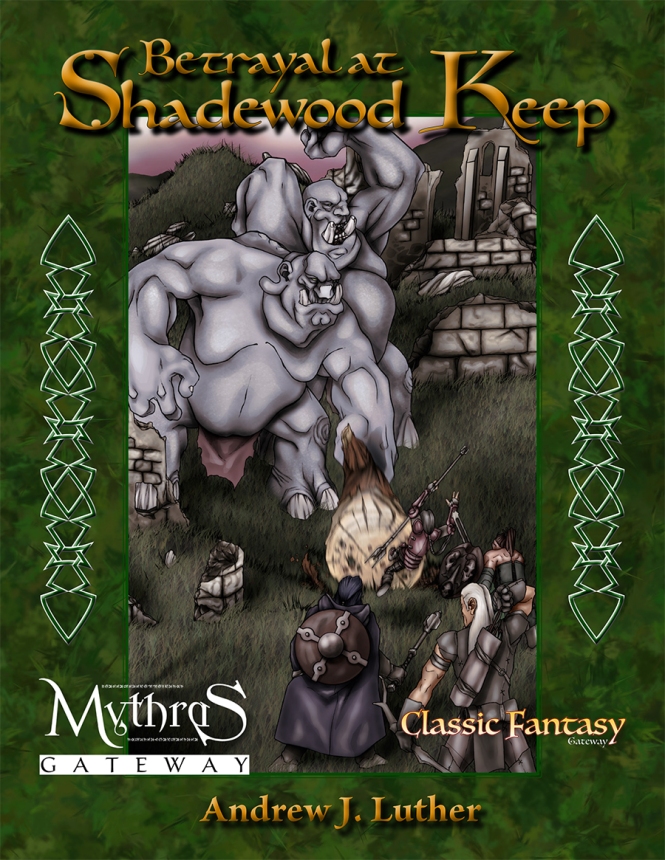 Raiding parties have been emerging from the dark Shadewood Forest to attack local villages. The paladin responsible for protecting the area is unable to stem the tide of destruction. Can you protect the helpless villages while uncovering the mastermind behind the attacks? Or will you fall prey to Betrayal at Shadewood Keep?

This 65-page adventure is designed for Classic Fantasy characters of Rank 3 and can be dropped into practically any existing campaign. This primarily wilderness-based adventure will give your druids and rangers a chance to shine, while still providing plenty of adventure for all character classes.

Betrayal at Shadewood Keep includes detailed descriptions of Kewin Town and Shadewood Keep, and all maps needed for play. Full monster and NPC statistics are provided, as well as two new gods—one good, one evil—that you can use to supplement your existing campaign pantheon.

Print versions will be available shortly, and anyone buying the print version will receive the PDF of the adventure at no cost. I’ll make an announcement here when the print book is available. 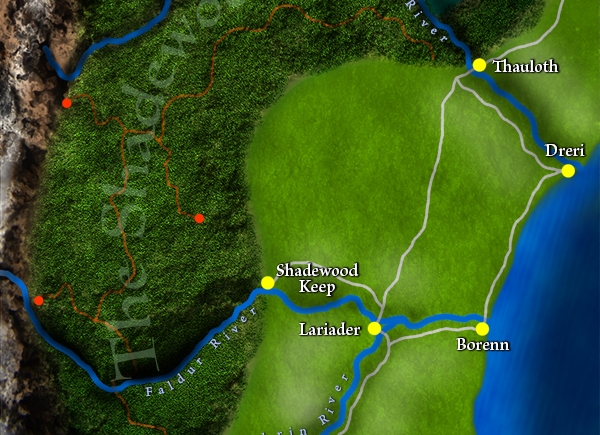 As announced last week, I’ve been working on an adventure for the Mythras roleplaying game and the Classic Fantasy supplement, both fantastic RPG products published by The Design Mechanism.

The content for the adventure is complete and is currently undergoing review with TDM, and all that’s left at this point is to finish up the maps and complete the cover.

This week, I thought I’d share two of the maps I did for the game, and compare them to the original maps I published back in the early 2000’s when I first released the adventure. I’ve had a lot of years of experience creating stuff in Photoshop since then, and I think that the maps are definitely much better than what I had back in the day.

The first map is for the region where the adventure takes place. In the original adventure, I split this up into two different maps, one for the overall region and one for all the various encounters in the Shadewood. Since I don’t need “filler” encounters when using Mythras and Classic Fantasy, I was able to streamline the encounters and simplify the map. 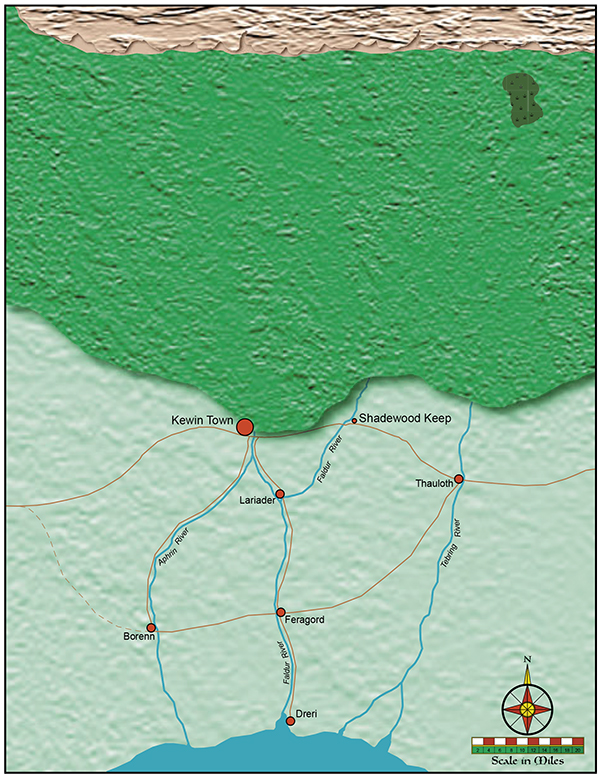 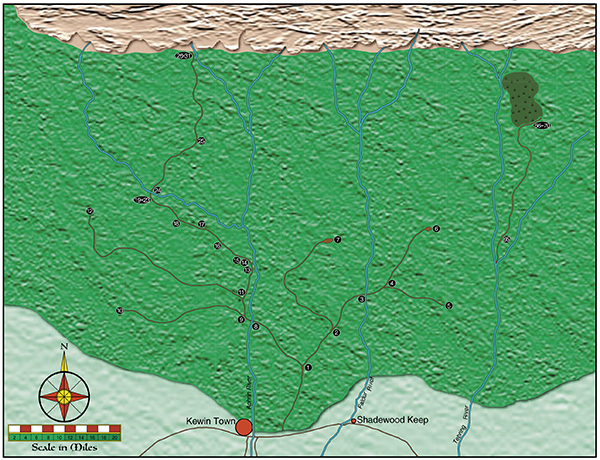 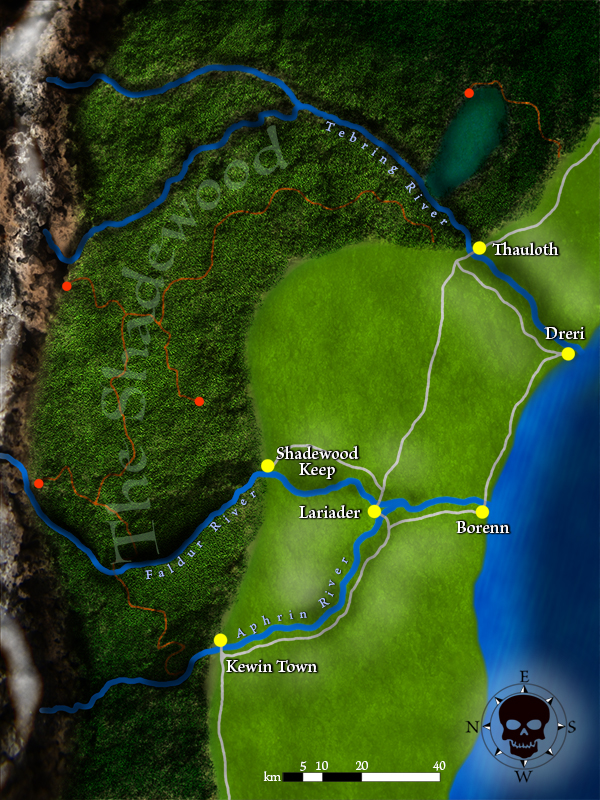 The region has a single large town—Kewin Town—and multiple smaller villages. The original map was done in Adobe Illustrator and was fairly simple. For the updated map, I wanted to improve upon it, so I moved over to Photoshop. 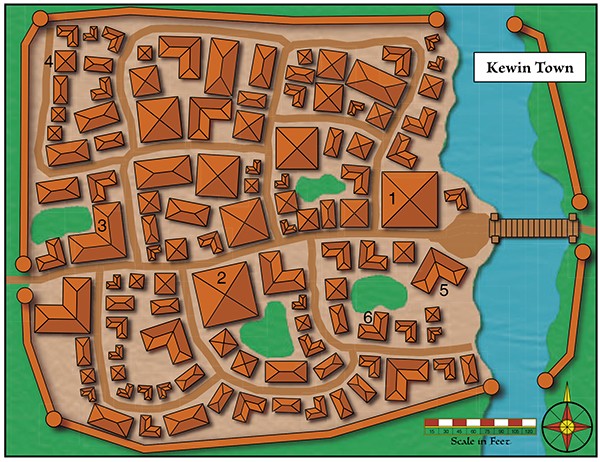 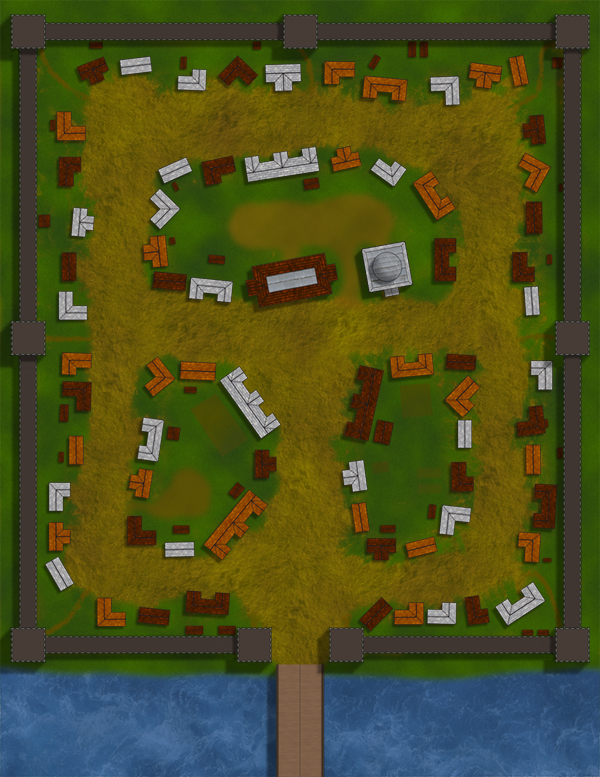 Last year, I spent a little bit of time updating the encounter maps as I intended to re-release the adventure, minus any reference to the D20 license. I had considered releasing the original version for 3.5, and also to add another version compatible with the Pathfinder RPG.

Here is a map that I did for the updated version. This encounter area will not appear in the new Mythras/Classic Fantasy version of the adventure, but it gives you an idea of the style of the new maps. 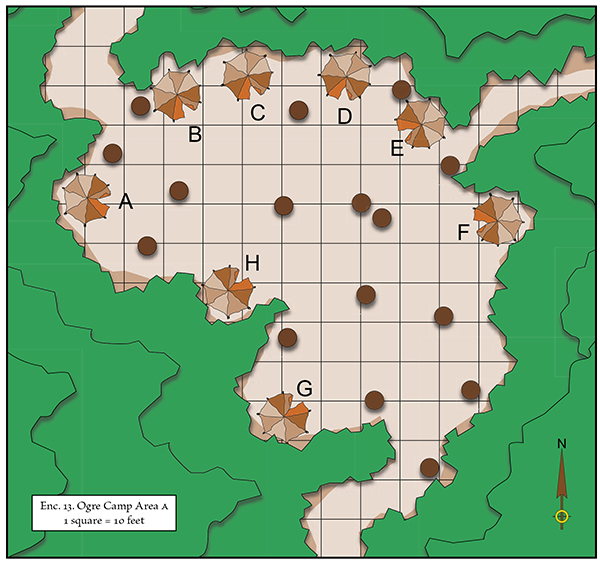 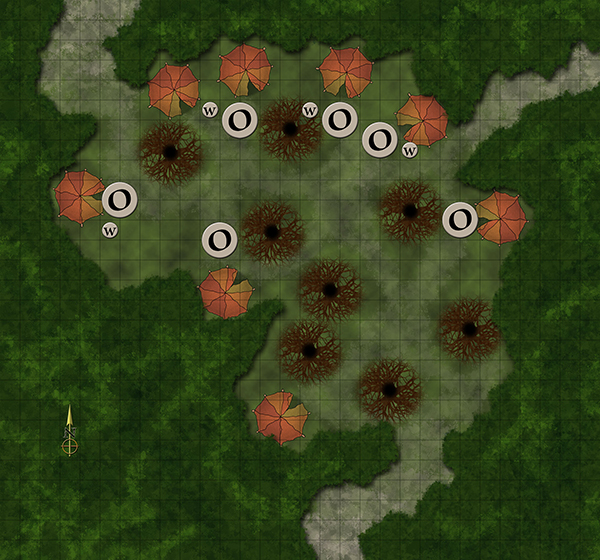 I have a couple more maps to complete, and a few minor corrections to the text, then the final version will be sent off to The Design Mechanism for approval. Once that’s done, I’ll post the new cover and announce a release date on DriveThruRPG and RPGNow.

I do intend to also have a print version of this adventure available—POD through DriveThru/RPGNow—but that will likely come a little bit later, and I’ll need to tweak the files for submission to Lightning Source, the POD supplier.

Once this adventure is complete, I’ll be back to working on The Traitor and the Thief. I’ve needed a bit of a break from the novel, as I have to rework a few sections and I needed to clear my head. But now I’m ready to get back to it and get the final draft done.

See you next week. 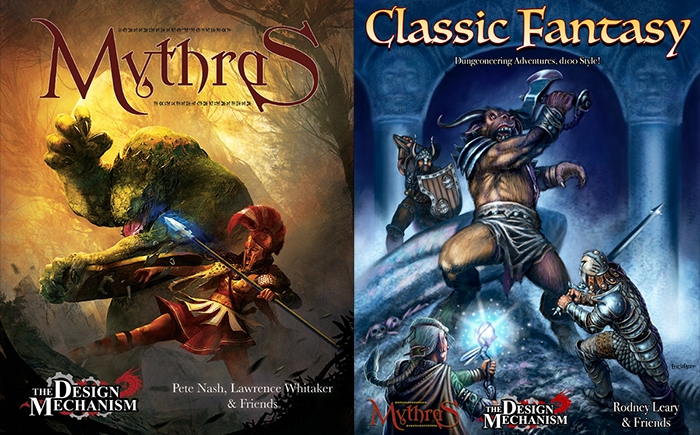 I first played the RuneQuest RPG back in the mid-80’s when my best friend ran a campaign centered around Griffin Island, a setting that had been adapted from the earlier Griffin Mountain of Glorantha fame. We spent a long time exploring the island, fighting orcs and broos, getting arrested and thrown in prison at least once, and generally causing as much mayhem as we solved.

I was never a fan of the larger Glorantha setting, as it never grabbed me. I found the sourcebooks unable to make me care about that world at all, and so we were happy to play on Griffin Island as a standalone location in a generic fantasy world that we never ended up exploring because there was more than enough adventure material on the island itself.

Since then, there have been a few editions of RuneQuest. One of the more well-known versions was the Mongoose Publishing RuneQuest 2E (MRQII), written by Lawrence Whitaker and Pete Nash. That game was a great version of the RuneQuest rules, and Mongoose gave back to the fan base by making the rules OGL, thereby ensuring that some version of the rules would always be available to anyone who wanted to use them.

When the Mongoose licence ended, they renamed their version of the game Legend (the core rules are still available in PDF from DriveThruRPG for only $1). Lawrence and Pete formed their own company, The Design Mechanism, and picked the licence back up. They released their own version of RuneQuest—for various numbering reasons referred to as RuneQuest 6—that took the work they had done on MRQII and expanded it in ways that they felt made a better game. It was a bit more complicated than previous versions, but the combat system, for example, allowed a level of detail that gave players a great deal of control over how they fought and inflicted wounds on their enemies. RuneQuest 6 is still held to be a high-point in the development of the game.

Ultimately, however, Chaosium found itself in dire straits and the original owners came back and rescued the company from its previous management team. Unfortunately, they also decided to pull the licences back in-house and, despite Pete and Lawrence keeping the game alive for many years when Chaosium did nothing to support it, The Design Mechanism could no longer publish RuneQuest 6.

Mythras is The Design Mechanism’s version of RuneQuest 6 without needing to rely on the RuneQuest licence. They have further developed the system to implement some tweaks and ideas they had since RQ6 was published, and it’s an amazing game engine that still provides an experience that is in marked contrast to other big fantasy game, D&D.

Needless to say, I’m a big fan of Mythras.

Since then, TDM also published the Classic Fantasy book, which takes the core ideas of D&D and moves them over into the d100 system framework. Classes are recreated in Mythras terms, monsters are converted, and many of the famous D&D magic spells have their counterparts in Classic Fantasy.

All of which leads me to my next RPG-related project.

Back in the early 2000’s, I published an adventure for D&D 3.5 called Betrayal at Shadewood Keep. When the d20 licence expired, I pulled that adventure from sale, intending to remove the d20 references and then put it back up. But I moved on to writing novels and never got around to it.

Lately, however, I’ve been using this blog to support great games that I enjoy. I looked at Betrayal at Shadewood Keep and realized that it would make a great adventure for Mythras and Classic Fantasy. So I reached out to The Design Mechanism and soon signed a licence agreement to allow me to re-publish a converted adventure for the Mythra/Classic Fantasy system.

I’ve been holding off on announcing this, as there was some important work to do on the adventure first. For example, in D&D 3.5, encounters are supposed to be set up to provide a particular level-based challenge at any given time. This results in a lot of “filler” encounters—combats that serve no other purpose than to provide some needed experience points so that the characters are the right level for later encounters.

Of course, those filler encounters are not necessary in Mythras, as there are no levels or restricted progression paths. So what I’ve done is take a look at the basic premise of the adventure, extract out the key elements and NPCs (and monsters), and redevelop it as an adventure that provides more open options and challenges that can be overcome in many different ways.

At this point, I’ve completed all the writing on the new version of Betrayal at Shadewood Keep, and the adventure is with the TDM folks for review. I’ve got a few maps that I need to complete, and then I’ll be publishing it through my Vanishing Goblin publisher on the OneBookShelf sites (DriveThruRPG and RPGNow). I expect this part to take a few weeks still, but over the next little while I’ll post the new cover design and a sneak peek or two.

In the meantime, here is the blurb for the adventure:

Raiding parties have been emerging from the dark Shadewood Forest to attack local villages. The paladin responsible for protecting the area is unable to stem the tide of destruction. Can you protect the helpless villages while uncovering the mastermind behind the attacks? Or will you fall prey to Betrayal at Shadewood Keep?

That’s it for this week. Check back next week for some sneak peeks at the adventure, as well as information on some of my other projects.