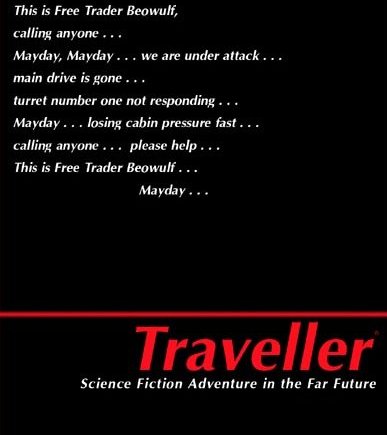 I’ve reached a point where I want to make a bit of a change to the material that I’m posting on the blog. Gaming, particularly RPG gaming, is a huge part of my life. While I love writing novels and short stories, I also love to create materials for my favorite RPG games.

So I’m going to be putting my regular Reading & Writing posts on hold for a while and try out something new. I’m going to pick a game and create some material for it over a couple of posts, and then move on to another game and do the same thing, and then another, and so on.

I hope to create some useful material for other gamers out there, while also exercising my imagination in other directions, and having some fun in the process.

I’ve always had a deep and abiding interest in Traveller, though I’ve never managed to get a real campaign off the ground for any serious length of time. I’ve also been a huge fan of early SF from the 50’s through the 70’s, having devoured books by H. Beam Piper, Heinlein, Asimov, Frank Herbert, Roger Zelazny, Philip K. Dick, and others.

In fact, in last week’s post about books I wish I had written, two of the six books listed sit solidly in the SF genre.

I’ve also been reading a fantastic series of blog posts on Tales to Astound! by Christopher Kubasik, in which he talks about the original three Traveller little black books (or LBBs) that came out in 1977. In those first Traveller products, there was no Third Imperium, the great sprawling setting that was later published for the game. Instead, the GM was expected to make up his or her own setting, just like in the original D&D little brown books from Gary Gygax.

The expectation was that GMs would use their love of SF literature to create a personal setting that included the things they wanted, and exclude that which didn’t appeal to them. The only implied setting in the original books is that there is some kind of centralized government far back that way, and that the player characters are out somewhere on the fringe.

This means fewer representatives of authority, more danger, more of the unknown, and more opportunity for actual adventure.

So, just like my story for April was an homage to Robert E. Howard, I’d also like to write a short or two in the style of early SF greats like Asimov. And so I’m going to combine these two interests into one project.

This week, and over the next few posts, I’m going to develop a sub-sector for Traveller. I’m going to use the random tables to create the base, and then I’m going to look at each world profile that I’ve generated and create something that is not just an extension of the Third Imperium, but a setting that reflects what could be found in the classic SF stories of the 50’s, 60’s, and 70’s.

Yes, I’m using the original Latin name for “dragon” as the name of my sub-sector, at least for now. I may change it once the true character of this region is developed, so it’s a working-name at this point.

I’ve already generated the worlds that will appear in my sub-sector by using the random tables in the Traveller LBBs. Each world has what is called a Universal World Profile (or UWP), and it includes all the numerical data about the world. In order, the information shows:

I haven’t name any of these worlds yet, so I’m leaving that part TBD for all the entries. I’ll have names by the time I post the second part of this series of posts.

There are forty worlds in my sub-sector. I understand that if you’re not familiar with Traveller and UWP, then this won’t make much sense to you.

And here is the map of the sub-sector: 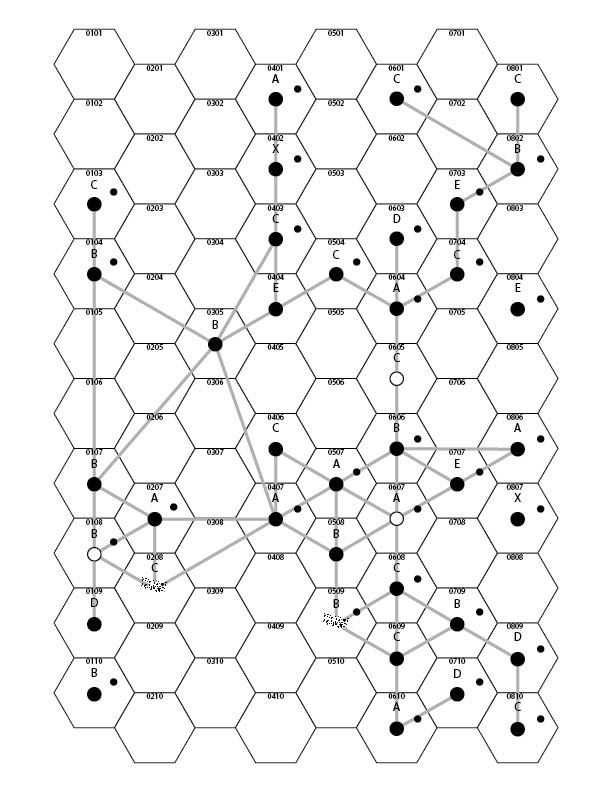 The grey lines are jump routes only (meaning it’s easier to travel between worlds that have established jump routes than it is to travel between worlds that are not connected in that way). In the original 1977 LBBs, there are no established X-Boat systems of communications, so this just shows the routes most ships tend to take in order to reduce navigational hazards.

Now that I have a sub-sector and all the profiles have been generated, I’m going to look at the various clusters of world in the region and see what interesting things come out of it.

Here we have two worlds (which I’m going to give temporary names):

The first world in hex 0103, Bitan, is a nice planet just slightly smaller than Earth, with a standard atmosphere and huge tracks of farmland (it’s an agricultural planet). But its population is pretty small for such a world, only 1 million people and its government is a charismatic oligarchy. The tech level is a bit higher than ours, with hovercraft and laser rifles, and more advanced computing power.

Its immediate neighbor, the planet Pirnath in hex 0104, is much smaller (only one-third the size of earth), but with 1,000 times the population of Bitan at 1 billion people. It’s a very dry planet (only 10% of its surface is liquid), governed by a religious dictatorship, and its trade classification is “Poor”. The tech level is the same as in hex 0103.

The immediate question that comes to mind is why the inhabitants of planet Pirnath haven’t annexed Bitan. They need the food supply that Bitan could provide, and they have more than enough people to throw at the problem. With the technology levels being equal, it would seem obvious.

There are a couple of different ways to go here. One is that the government of Pirnath is planning to invade Bitan. They’ve reached a point where their population has grown beyond the point they can feed themselves, and if they take over the larger planet they’ll be set for a while at least. They aren’t going to abandon Pirnath entirely—it has some kind of religious significance to them—but they are preparing to invade and occupy their closest neighbor.

But there has to be more to it than that. Bitan is a nearly Earth-sized planet with only a million people despite having great agricultural capacity. What is stopping its population from growing? And does that same factor play a role in helping them fend off the possible invasion by the people of Pirnath?

Another angle is that Pirnath’s population would never consider invading Bitan for their food. Perhaps their religion requires them to be pacifists. Perhaps the leadership of their government/church is fractured by a dogmatic schism and they have no ability to act as a united organization anymore.

And there is another agricultural world just three hexes away from Pirnath (hex 0107), of the same size as Bitan but with an even smaller population of just a hundred thousand people. That world is Balkanized, so there is no central planetary government at all. Are these a bunch of small settlements, perhaps established by other worlds in the vicinity? Would those other worlds band together if the people of Pirnath decided to expand outward in an attempt to take a more hospitable planet?

As you can see, these are only the first three planets on the map, but there are already countless possibilities, and that leads to countless adventuring opportunities.

Over the next few posts, I’m going to continue to develop this sub-sector. I’ll make decisions on some of the questions I’ve raised above, and develop the worlds—and possibly some alien races—that will make this region of space a great place in which to tell stories, and adventure in a game.

I’m also happy to hear ideas from others who have developed their own region of space for Traveller or any other science fiction roleplaying game. Tell us about your own creations in the comments.