Back at the beginning of 1987, a small company named Bard Games released a very cool new roleplaying game called Talislanta. Ads in Dragon Magazine loudly proclaimed “no elves…” and explained that it was for people “tired of ‘look-alike’ fantasy games.” 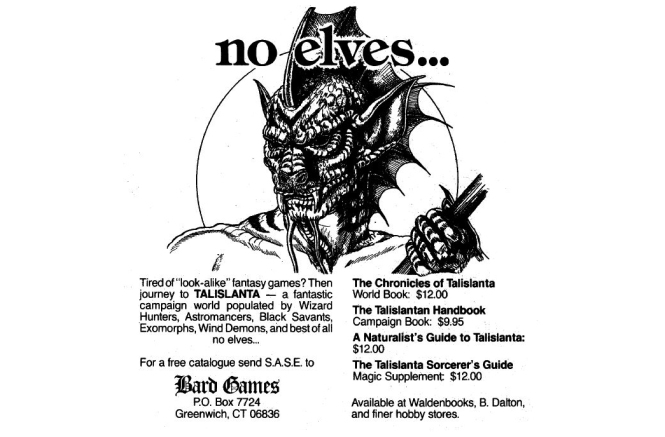 The world of Talislanta was densely populated with alien cultures, strange races, and fascinating character types (a.k.a. classes). The system revolved around the Action Table, a single chart against which the players rolled to determine the success (or failure) of any action. It was a great example of an early unified system that worked the same way regardless of whether the character was fighting, casting spells, sneaking past a guard, or haggling over prices with a merchant.

The original game was written by Stephen Michael Sechi and illustrated by P.D. Breeding-Black, and Talislanta quickly became known as a great little game with some unique elements in the otherwise Tolkien-dominated fantasy genre at the time. The art was fantastic, and a four-page section showing all the different races and character types became one of my favorite parts of the book. I remember paging through that section, carefully examining each picture in order to determine which character I was going to play.

Unfortunately, I didn’t purchase Talislanta myself in those days—another person with whom I used to game bought all the books available at the time:

But, things being what they were, the guy who owned the books didn’t find the actual system crunchy enough, and he converted it over to RuneQuest III for the one short-lived campaign I got to play. He also severely limited the racial options (e.g. I wasn’t allowed to play a Danuvian Swordswoman because I wasn’t female myself), and RuneQuest was far deadlier than the actual Talislanta system, which meant the whole high-adventure feel was replaced with gritty and careful exploration.

Sidenote: Many people have horror stories about early GM’s who were terrible at running games, and this guy was my own nightmare. I’ve heard that his other favorite game, Shadowrun, can actually be fun to play, but I’d never know it from his running of the game back in the day. But he hasn’t been a part of my gaming group for a long time now.

Anyway, after the entire party was wiped out by a 20-foot-deep pit (not a hidden one, all the characters died just trying to descend—with climbing gear—into the pit and back up the other side), we moved onto other games. I borrowed the books from the GM for almost a year, but never got to run it myself.

The Talislanta game was quickly followed by a second edition, and then a third edition was released in 1992. This edition moved the timeline of the setting forward and made some changes to the status quo found in the first two editions. During the d20 boom, it even got a Talislanta d20 edition by Wizards of the Coast (when they temporarily owned the game). The fourth edition—called the “big blue book” by Talislanta fans—became the best known and generally most-favored edition. And finally, the fifth edition introduced a Path system for creating characters, and broke the books out into separate volumes again.

In 2010, the original author (and now the sole rights-holder of the game) Stephen Michael Sechi made all of the editions free to download on the main Talislanta website. He felt that he wanted to give the game back to the fans, and hopefully introduce a whole new generation to the Talislanta world. PDFs of all the books can be downloaded legally from the website for free.

And it seemed like that would be it for Talislanta. But it turns out the game with no elves is still kicking.

At the beginning of April, Nocturnal Media launched a Kickstarter for Talislanta: The Savage Land. Sechi teamed up with Nocturnal to produce a whole new Talislanta game. The original game is set in the New Age, “a Renaissance-like period that started a thousand or more years after The Great Disaster, a cataclysm that marked the fall of the once-great Achaen Age.” 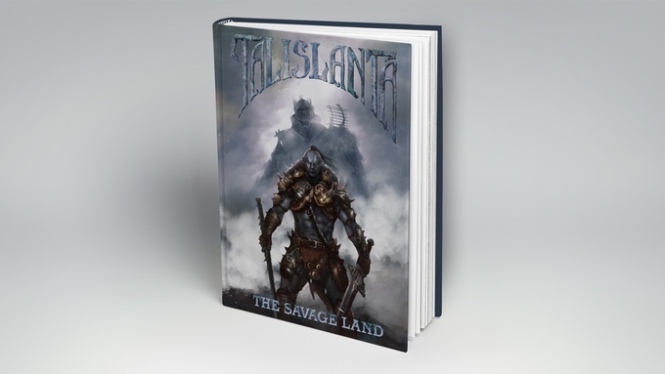 Talislanta: The Savage Land is a prequel to the original Talislanta game. It takes place just a short time after The Great Disaster.

Written once again by Stephen Michael Sechi, this new Talislanta game is much more a sword-and-sorcery game than one of high-fantasy. The artwork by David Arenas looks fantastic, and there are some great new innovations in the rules (e.g. the characters can influence the success of their tribes by managing large-scale actions on a Mass Action Table, similar to how the original Action Table worked).

The game will be released for three different rules systems. The first is, of course, the Talislanta system. In this case, they are using the second edition of the game as the base, and incorporating innovations from the fan-favorite fourth edition to arrive at the best possible system for this particular setting.

The second set of rules will be Open D6, the fun system that was found in the original Star Wars RPG from West End Games. Nocturnal now owns West End Games, and so has the expertise to produce a version of Talislanta: The Savage Land for this system.

The final set of rules will simply be the current (fifth) edition of Dungeons & Dragons. Not a great fit for Talislanta by any means, but I’m sure it will open up the setting to more players, and that’s ultimately a good thing.

The Kickstarter is still ongoing until April 30th, and I’m happy to be a backer. With 21 days still to go, they’ve already raised three times their original goal and have more than 800 backers.

Sidenote: I’ve had pretty good luck with Kickstarter so far. I’ve been careful to back projects by companies that have a good reputation, and so far I’ve yet to have a Kickstarter be late, never mind not deliver at all. This is one in which I have a lot of confidence, as the Talislanta-rules version is already completely written, so the risk is fairly minimal.

Now is a great time to get into Talislanta (or get back into it if you haven’t looked at it in a long time). All the rule books are free, and this new game promises to be gorgeous and fun, and open up a whole new era in the history of the Talislanta world.

Did you play Talislanta back in the day? Do you remember the ads in Dragon Magazine? What was your favorite character type in the Talislanta world? Tell us about it in the comments.