The Traitor and the Thief

I’m still doing well with the manuscript for The Traitor and the Thief, but as I mentioned last month, it looks like I won’t have it completed by December 31st. I’ve lost a few writing opportunities over the last few weeks due to the Christmas season’s responsibilities, and I’m a bit behind.

However, things are still proceeding, and I don’t think I’m too far behind schedule at this point. I’m now on vacation for the next week, and I’ll be getting in some writing time every day. While I don’t think I can completely make up for lost time, I’m looking forward to driving toward the completion of the manuscript.

For those who are Wattpad users, I’ve posted all my short stories on that platform as well as here. Wattpad is very popular platform for user-generated content, and it’s another way for readers to discover my stories. So if you like to read on Wattpad, you can find all the fiction I’ve posted on this site over there.

This month’s short story is one I wrote all in one sitting. I had no idea what I wanted to write when I started, but as soon as I wrote the first sentence, it all started coming together almost faster than I could type it. The story is called Unhidden, and I look forward to posting it.

Now, next Sunday is Christmas Day, and so I won’t be posting it on my usual schedule next week. Instead, I’m going to post the story on December 27th. So check back here then, or on Wattpad, to read it.

Note that if you want to get updates as I post them, the easiest way is to follow this blog. Then you’ll never worry about having to miss a post.

Tales of the Undying Empire

Here’s a picture of the physical book. 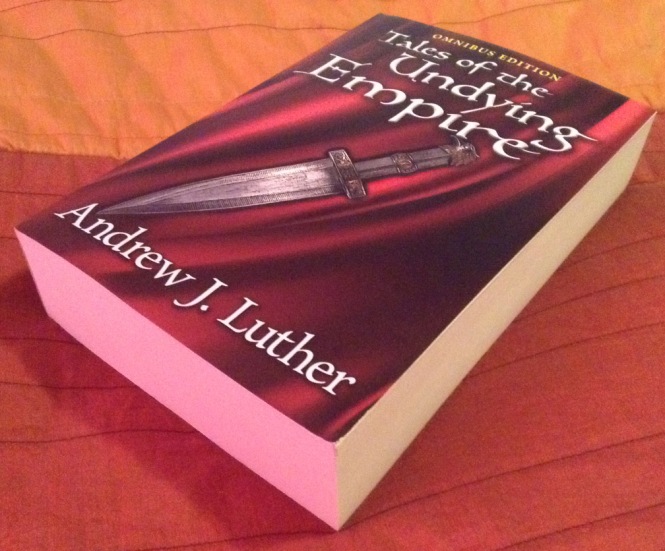 Yes, it’s a beast. At 6″ x 9″ and 723 pages, the book is almost 2 inches thick. And I found some issues that I will need to correct, which will cause a reflow and add more pages.

At this point, I’m not sure having a physical version this big is worth it. There are a couple of things I’m going to try, but I’m thinking that I may just release the ebook version of the omnibus and leave the physical version out of the equation.

So my plan is to release the ebook version this week—I’ll make an announcement here when it is live. The price will be set so that you get a deal if you buy the omnibus over buying each ebook separately.

And that’s it for this month’s update. Please consider following my blog, and look for the the new short story, Unhidden, on December 27th.

In the meantime, I hope everyone has a great holiday.