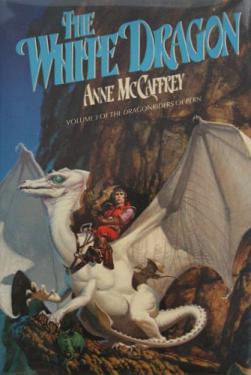 I recently finished reading the original trilogy in the Dragonriders of Pern series (Dragonflight, Dragonquest, and The White Dragon) to my son. He quite enjoyed the books, especially The White Dragon, and the mix of fantasy and science fiction elements was an interesting departure from the pure fantasy stories I’ve read to him in the past.

I originally read the series back in 1982 when I discovered a copy of The White Dragon in the public library.

At the time, I didn’t notice that it was the third book in a series. I just saw that cover and decided I wanted to read it right away. And that’s exactly what I did.

Of course, once I had visited the world of Pern, I immediately sought out the first two novels and devoured those, and then eventually read the Harper Hall Trilogy. I remember finding it really interesting to read about events that had been mentioned in passing in The White Dragon, which assumed the reader was already familiar with them. Reading the series out of order provided a different perspective.

Over the years, I’ve met at least another five people who also read The White Dragon before reading any other Pern books. It seems the Michael Whelan cover was a masterpiece at attracting young people to grab that novel and dive in.

What is great about this book is that it presents an interesting, almost self-contained, story that paints a vivid picture of the world without leaving a new reader stranded. This is something that is not often done.

Many series are written in such a way as to make it nearly impossible to read them out of order. Imagine trying to read The Song of Ice and Fire series by starting with A Feast for Crows. Or grabbing House of Chains as your introduction to the Malazan Book of the Fallen series.

Other series are originally written out of chronological order. The first book to star the now-famous dark elf ranger, Drizzt Do’Urden was The Crystal Shard. R. A. Salvatore later went back to write Drizzt’s origin story in The Dark Elf Trilogy (starting with Homeland), and now it’s possible to start reading the series at either entry point.

One of the most famous examples of non-chronological publishing is the original Conan stories. While these are short stories rather than novels, Robert E. Howard jumped around to different periods in Conan’s life as he wrote the individual stories. There have been many later attempts to put the stories in chronological order, but the reality is that they can be read in any order with no loss of understanding.

This was what I was going for in my own Tales of the Undying Empire series. I wanted the reader to be able to jump in with whatever book first captured his or her interest. While there is a basic chronology—the events in the books happen in an ongoing timeline—each story can be read on its own. By contrast, my new trilogy, Undying Empire: Rebellion, is really meant to be read in the order it is being written.

Most book series are meant to be read in a particular order, and just don’t really work if you start at any point after the first book. The White Dragon is an exception. There are others, of course—the Diskworld series comes immediately to mind—but they are not common.

But when they work, they present an opportunity to explore a story from a different perspective, to experience the characters in different ways, than the author originally intended. And that’s what art is all about, really—bringing new perspectives to the people who get to experience the art with a fresh set of eyes.

What other series have you read out of normal reading order? What worked really well, and what didn’t work at all? And how many more people first experienced Pern by starting with The White Dragon?

Tell me about it in the comments.

One thought on “Reading and Writing: Out of Order”